The 34th President of the United States is the subject of today’s post—and in reality, an interesting case study in what effective executive leadership, focus, and prioritization looks like when related to productivity measures. A fact: Dwight Eisenhower lived an incredibly productive life, and here’s a bit of background if you aren’t familiar with who the man was.

Prior to becoming president, Eisenhower climbed to the highest ranks of the United States Army, serving as a five-star general and the Supreme Commander of the Allied Forces in Europe during World War II. It was Eisenhower who was responsible for strategizing on and executing the invasions of North Africa, Germany, and France. Furthermore, he also served as the President of Columbia University and was the first Supreme Commander of NATO. As POTUS, Eisenhower was successfully elected twice and launched programs that led to the creation of the Interstate Highway System in our country. Another interesting point? It was Eisenhower who was behind the launch of DARPA (formerly called ARPA in 1958)—which is the Defense Department agency that was eventually responsible for expanding the technology that was used the creation of the Internet. And he also was key in forming NASA and introducing the Atomic Energy Act.

Oh, and through it all he was also able to pursue some hobbies that were dear to him—golfing and oil painting.

Of course, it’s not a rarity for a high achiever to have a litany of accomplishments on their resume as well as multiple, massive responsibilities. Nor is it a foreign concept for these individuals to have a wide variety of interests that keep their minds engaged and curious. However, the reason that I am highlighting Eisenhower, specifically, is because he had an incredible ability to not only sustain productivity measures for weeks or months at a time—but rather decades. The methods that he used to manage his time, track his productivity, and organize tasks are actually concepts that have been studied by many people over the past few decades, and this is what I look to examine today.

Time demands are some of the most pervasive sources of tension and pressure in our personal and professional lives—and this is especially true when considering the expectations placed on high performers and executives. Eisenhower famously quoted Dr. J. Roscoe Miller, president of Northwestern University, during a 1954 address to the Second Assembly of the World Council of Churches. He said, “I have two kinds of problems: the urgent and the important. The urgent are not important, and the important are never urgent.” Deemed, “The Eisenhower Principle,” this thought provided the structure for how he focused on priorities and created strategy surrounding the workload he was responsible for.

So, what’s the difference between “urgent” and “important”?

“Urgent” is associated with a task that requires immediate attention. Urgency puts a person in a reactive mode, and typically is linked with being defensive, negative, hurried, and/or narrowly-focused.

“Important” is a term associated with a task that contributes to a long-term mission or objective. While it’s true that sometimes important tasks are also urgent, this isn’t a typical situation. Focusing on an important task garners responsiveness. This keeps a person calm, collective, and inventive.

Ultimately, each of us must decide whether a task we are accountable for is urgent or important. This can be done by thinking about whether not doing something would place an active risk against long-term goals or strategy. If the answer is yes in this regard, then the task should be deemed extremely important.

Separating tasks is something that is probably easy to do once or twice—the trick here is to develop habits that allow this to be implemented long-term. Thankfully, Eisenhower also created a tool that can be used when identifying tasks that are urgent and those that are important—and it can help you become consistent. This consistency over time will significantly increase your productivity.

What is the Eisenhower Decision Matrix?

The most famous productivity strategy that Eisenhower ever created was called, quite simply, the Eisenhower Box. It’s an easy-to-use decision making tool that helps one organize tasks and identify where action needs to be taken. Consider the following decision matrix:

From a visual perspective, this is what the Eisenhower Box looks like: 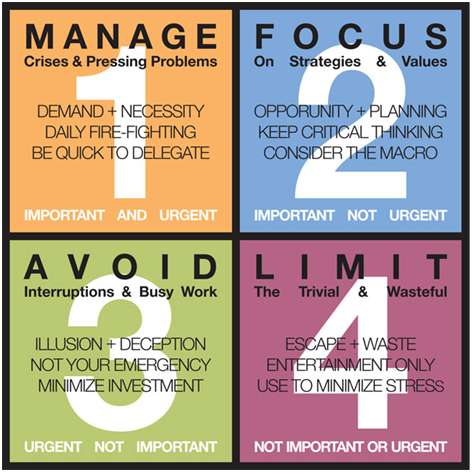 Now, as you begin to think about what this looks like in your life—let’s talk observations regarding implementation. Most people spend their time doing what is urgent. Urgency takes precedence over importance. Today, there is nothing as urgent, moment to moment, as a Tweet. Instagram. Instant Message. Or your email inbox. The tendency is to read, and then respond to emails in your inbox. Only after you’re finished responding, do you then decide on what email you should be writing and to whom. Working this way, you are letting other people drive your priorities and how you spend your time. And so, your important emails frequently don’t get written until they are very urgent.

It is important to get out of responsive mode and gain more control. Hence, before using the Eisenhower Box, the process begins with asking yourself: What primary goals are driving your life? What are you working towards? What is important to you? Take time to reflect on your long-term goals, and make some hard decisions and delete tasks that are not directly associated with your long-term mission and overall goals. From there, consider what components and variables are part of the overall goal. What comes into play when using this method? The pinnacle point is to focus on spending the majority of your time in the “Important and Not Urgent” quadrant. This is a peaceful place and provides you with the ability to work on things important to you while also giving you enough time to finish them. As you progress through life and your career, things change.

In my work, I oftentimes find that most leaders became leaders because they excellent ‘doer’s’, enjoy doing, and get satisfaction in a job well done. I call them “Super Doer’s”. But as they become senior leaders, they in fact, lose their efficacy if they remain a Super Doer.   Doing literally and figuratively becomes below your pay grade. Moving from Super Doer to leader requires reflection of the future, strategic planning, and changing what you consider important. And in Eisenhower Box terms, it means spending time in Quadrant 2. Unless you plan on extending your already long work day, it is necessary to let go and delegate many items in Quadrant 1. Quadrant 1 is probably your comfort zone. When you free up time, you will be able to confront the difficult question of “Do I need to be doing this right now? Take time to think.

Keeping that in mind, I also think that two supporting questions need to be added in order to clarify the process (as well as your thinking) when beginning to use the Eisenhower Box. Ask yourself: What am I working toward? What primary goals are driving my life? I find that when you are very open and honest about what is important to you, your personal life, and your career, you have the ability to make decisions about what you must be doing and what you can eliminate. And that’s one of the primary differences between the most simplistic form of management and the guiding principles of leadership—which was definitely embodied by Eisenhower.