Joan, Peggy, and Betty: What Mad Men Taught Us about Women’s Leadership 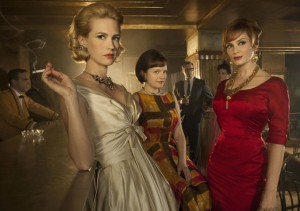 The title of this article probably caught you off guard—the idea of women’s leadership, especially when considering the premise of the hit TV show Mad Men, might seem like a royal stretch. However, if there is one thing that dawned on me as I followed that show over the years is that it became more about the women in Don’s life, and their skills—than Don Draper himself.

There was driven and motivated Peggy Olson, who was “leaning in” long before Sheryl Sandberg came up with the concept. Betty Draper, who made the stark realization mid-series to break free from a relationship that wasn’t benefitting her and carve a new future. And then of course, there is my personal favorite, Joan Harris. While she may have appeared comfortable at the onset as the office sex symbol, viewers quickly discovered that the bombshell had some serious brains—and drive.

All of the women of Mad Men started off in a position where freedom, liberation, and success seemed wildly impossible. The playing field was incredibly uneven, the decks were stacked against them—and it was Roger, Don, Pete, and the rest of the boy’s club that were clearly in charge.

The Rise of Women

It’s true that women on Mad Men faced some of the biggest challenges when compared to the men in the office who were more apt to down three cocktails before 10am and then settle in for a nice nap on the office couch. It was the women who truly kept things running—even though it was the men who took credit for found success. However, let us consider the opening credits of the show where a man, presumably Don, falls from the top of a building as his office (i.e., life) crumbled around him. It could be speculated that as this figure tumbled amidst the sexist and women-focused advertisements that he had helped bring to life that it was actually the female caricatures that were rising up in his stead.

Well, in any regard, while the show might have ended—the writers never blew up the patriarchy (even though Joan had stated that she wanted to “burn this place down”)—but there were incremental wins for our ladies—and it was because of the skills that they had acquired along the way.

Joan’s transformation on the show was truly remarkable. Here is a woman who was introduced to us as Sterling Cooper’s Secretary-in-Chief, scheduling a trip to the OB/GYN for Peggy on her first day, and doling out instructions that it’s always wise to keep a fifth of Canadian Club in a desk drawer just in case Mr. Draper ran out. Her initial advice to Peggy was, “He may act like he wants a secretary, but most of the time they’re looking for something between a mother and a waitress.” But then, Joan began to morph. Perhaps her pivotal moment occurred mid-series when she agreed to have sex with a client “for the good of the firm”, but only if she became a full partner. Not a pretty way to get ahead. But rightly or wrongly, Joan felt it was the only way. Quid pro quo. On her terms.

And then, fast forward to one of the last episodes of the show. Joan is finding the new territory, as a partner and account manager at McCann Erickson, increasingly difficult. Many of her challenges are old ones—being mocked by the men she works with, having her research and insight overlooked and deemed unnecessary, and then suffering for speaking up against men who state they can’t “take orders from a girl.” To add insult to injury, she is offered a free reign in her new role, but it’s quid pro quo. Again, she needs to sleep with a male counterpart in order to get ahead. Yet now, she’s changed. She is no longer willing to use sex to hold onto something that she had already achieved. Power.

Even when Joan approaches her boyfriend out of frustration over what happened, she’s told to just deal with it, and not complain. Deciding to ignore this advice, she takes her complaint to Jim Hobart, the president of the firm. Joan is tired of the sexism, says she will contact the EEOC, sue the firm and embarrass him in the press if she is not bought out for the full amount of what she is owed per her contract. Hobart is nonplussed. He says he will offer her fifty cents on the dollar on the half million she is owed just to be rid of her—or he will simply spend the entire half million on lawyers in order to fight her suit. Hobart knew the EEOC had no track record track record at the time. Joan knew this too. Infuriated, she approaches her one time lover, colleague, and friend, Roger—who gives her advice she didn’t expect.

Although Joan was ‘mad as hell, didn’t want to take it anymore’, she was smart enough to know that there were insurmountable roadblocks to gender equality at the time. The prevailing norms placed women at home and men at work in positions of power. In addition, harassment and workplace discrimination laws were only recently put into law, and public sentiment hadn’t changed yet. Women were expected to follow. Not lead. While Joan might have taken the deal—she was also savvy enough to take her Rolodex, which is what allows her to prevail in the end. Pushed out of an environment that had no use for strong women at the top, she leverages her own connections and left the male-dominated corporate institution that was holding her down—and in turn, started her own business. She was a true vanguard of her respective time in history.

And then there is Betty’s story. Yes, Betty Draper, the woman who usually had all of the usefulness of a houseplant. However, Betty too, delivers a powerful message regarding her role, as both a woman and a leader, on the show. While she might have been overlooked as a dynamic character, especially when considering the fact that she didn’t work, wasn’t maternal and seemingly floated through life at the behest of the men around her—it is her endgame that shows Betty’s true worth.

Betty wasn’t particularly intelligent or kind, she wasn’t funny, and her bitterness showed through as her story carried on. However, she does find ambition. Her children require less of her time, her second husband’s political career is on the rise, so she decides to go back to college—at the exact time that she finds out she has terminal lung cancer. She is dying, and her newfound ambitions are useless. Her life is unchanged and will remain that way. But she realizes this, accepts it, and marches on. One of Betty’s final scenes shows her climbing a steep stairway, wheezing with every step, and going back to class.

The stairs might not have gone anywhere for Betty, but the fact is, she kept at it, even when facing defeat. As much as Betty was unlikeable, her lesson too is especially poignant to women. Keep going—no matter what. Be strong.

Be a Woman. Be Successful Your Way

Peggy Olson began on the series as the perceptive, albeit naïve secretary—but she ended it as a fearless and ballsy copy chief. I remember clearly one time on the show when the team, after performing a coup d’état and starting their own firm, was working late, trying to establish themselves, hijack some accounts, and make a go of it. Even though she had progressed from the role of secretary, Roger decided that it was okay for Peggy to regress into the role because he needed something. With a sigh, he said, “I’m tired Peggy, can you get me some coffee?” Unapologetically Peggy answered, “No.” It wasn’t the first time Peggy brought the brass out to the men she was forced to deal with, and it wouldn’t be the last.   Then there was another time when she was confused for a secretary by a copywriter interviewee and she put the man in his place with the words, “I’m the person you need to impress right now.”

I always appreciated Peggy for her ability to climb the ranks by speaking truth to power. She had a keen sense of human nature, realized she had to be an advocate for herself, and learned the true art of negotiation. She demanded office space, and insisted on raises (most notably shaking down Roger for a bonus when she did work that he “forgot” to tell her about). Moreover, Peggy never settled and she certainly knew that no matter what success she might achieve, she couldn’t rest on her laurels if she wanted to continue to grow as a professional. She proactively contacted headhunters, just to see what was out there, and made strategic allies—all in an effort to attain her ultimate goal. She knew exactly what she wanted and wasn’t afraid to say it aloud: She was set about becoming the first female Creative Director. It’s safe to say that Peggy followed the advice she was provided early on in the series, “You’re never gonna get that corner office until you start treating Don as an equal. And no one will tell you this, but you can’t be a man. Don’t even try. Be a woman. Powerful business when done correctly.”

A Road of Progress

The 1960s weren’t that long ago—and yes, progress in terms of gender dynamics and women’s leadership has been made. Most companies would never allow someone like Don Draper to manage via a fear-driven, sexist approach (at least not for long); instances of quid pro quo have dramatically decreased; blatant employment discrimination usually isn’t tolerated; women have entered the workplace in droves; and they hold more leadership positions everyday. But there are prevailing issues that women still experience today.

In the journey to become leaders today, women have tried, frequently unsuccessfully, to act like men. There has been a plethora of research affirming that when women exhibit typical-male-behaviors , they aren’t necessarily viewed as effective leaders. For example, Fortune Magazine recently published a study by Kieran Snyder in August, 2014 in which she analyzed performance reviews from different companies. She found that the word “abrasive”, while used in many women’s reviews, never appeared in any reviews of their male counterparts. “Abrasiveness” is problematic for women.

Alas, to lead successfully women need to forge new paths of leadership styles. The advice Peggy was given is worth repeating: You can’t be a man. Don’t even try. Be a woman. Powerful business when done correctly.